Apart from their visual impact and shade-giving qualities, trees can provide support to the water table, maintain the soil, help clean the air, provide homes for many animals, birds and insects, as well as produce food for consumption. PRASAD Chikitsa’s Agricultural and Community Awareness Departments have raised the awareness of the value of trees in several ways. 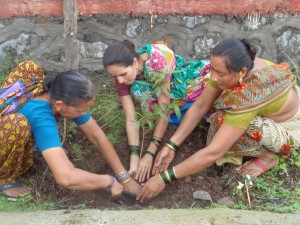 The Social Forestry initiative has spread awareness of the environment, the need for protection and how to increase green cover. Sessions conducted by PRASAD Chikitsa staff include topics such as threats to the environment, pollution and its causes, the importance of planting trees and their survival, and social responsibility.
Even though it was the peak farming season, 443 women from 17 villages actively participated. They accepted responsibility for the survival of the 1025 trees that had been planted in the yards of houses and school yards, in protected areas, along roadsides and in other communal areas. The women staked and fenced the trees in order to protect them. 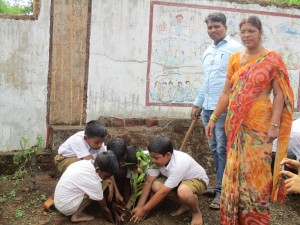 Zilla Parishad School, Chambale, is an example of how children have begun to realize the importance of planting trees to help the environment.
PRASAD Chikitsa staff created a layout for the planting, organised the excavation of the holes at the school and supplied 25 saplings. They were planted in the school grounds by the teachers and students with guidance from PRASAD Chikitsa staff. 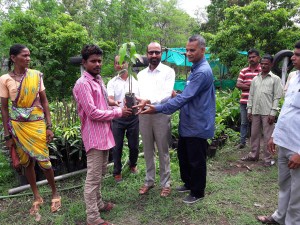 PRASAD Chikitsa holds talks and demonstrations at its Gorad Farm. In one example, Mr. Nayansingh Thakor, a former dean of the College of Agricultural Engineering & Technology in Dapoli, explained the importance of fruit tree species planted under the Wadi program. He described a technique for old mango tree regeneration, as well as growing pulses as crops, and the post-harvest technology of agri produce. Approximately 1100 fruit trees and forestry saplings were distributed among the thirty-three farmers who planted them within the next three days. 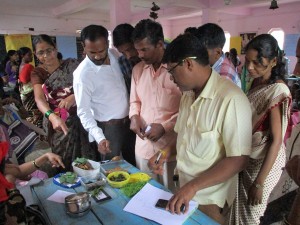 PRASAD Chikitsa staff attend information fairs in India on topics such as forest vegetables which grow wild in the monsoon season. At this fair, the staff looked at the cultivation of different types of vegetables suitable for a small patch of land for home consumption. For commercial production and trading they identified ideas for farmers. PRASAD Chikitsa staff visited stalls arranged with vegetables and vegetable dishes to taste. Women at each stall explained recipes and the health and medicinal benefits of the vegetables, which the staff recorded.

You can help PRASAD Chikitsa !

Did you know you can donate shares, rather than cash, in your Will? It can achieve a better result for the charity you wish to support.

If you state your gift as shares (rather than a cash amount), no capital gains tax (CGT) has to be paid – even if the charity chooses to convert them to cash later. The charity of your choice, provided it is a tax exempt charity, receives the full amount of the shares. So a gift of shares in your Will maximises the amount available for your favourite cause.

Maximising your donation while you are living.

You can also donate shares directly to your favourite charity during your lifetime. And, if franking credits are involved, it becomes an ongoing gift rather than a one-off.
Please contact Peter Speakman, a PRASAD Australia Director and the board’s legal advisor, for further information. E:speakman@speakman.com.au tel: 03 9822 8611.

How You Can Help